skip to main | skip to sidebar

To quote my last post:
"I felt comfortable enough to get some sleep."
I haven't seemed to have this luxury since I made that post. I find it odd. It's as if it knew that I was talking about it. It's been at my window every night since I made that post and hasn't left until a little before dawn. I haven't slept at home in two days and when I do sleep, it's for a couple hours a day at work.
Posted by Samael at 3:09 PM 2 comments:

I think I'm going to be posting here more often now. Due to some extreme circumstances, I figure it best to post my thoughts about what's happening right now and possibly get some help from anyone who may know what could be happening.

To elaborate; I've been being followed. It's come to my attention that what is following me is what Devon saw up until he mysteriously died (which is why I'm posting this here, and not anywhere else.) Since I made that post over four months ago, I've noticed something odd. I would see the figure of a man, or what would look like a man, out of the corner of my eye. Once I try to get a better look at it, it was as if it wasn't there at all, which is what I tried to pass it off as. Just me seeing things.

However, this figment of my imagination became more tangible. It started about a month ago. I would see this entity right outside my window, across the street, in the trees in the park I pass by on my way to work. Last night it was at my window, knocking on it, as if it wanted me to come outside. I stayed in my bed, doing my best to stave off the sleep that was trying to overtake me, for fear that it would come into my house and take me. The rapping at my window stopped after three hours and after another hour, I felt comfortable enough to get some sleep.

I didn't see this creature on that night he mentioned. I just saw him and his dog.
Posted by Samael at 11:46 AM No comments:

Uh... Hey there. I figured I should probably post something so those who are curious know what's going on. Um... I'll just go out and say it. Devon is dead. This is Samael, his neighbor, posting. How I got ahold of his laptop, I'll explain later. The cause of death is still unknown, but from what I saw of it when they wheeled it out, it looked like strangulation. It happened a couple months ago, but I just got the laptop and saw this open, read the posts, and figured I should say something.
Posted by Samael at 11:09 PM No comments:

Sorry I haven't update in a while. Nothing much has happened, and I didn't really see the need to post anything.

However, I had another encounter with the thing last night. This time it was more... disturbing.

I was in my kitchen, making something to eat, when my dog Machiavelli
Posted by Samael at 8:12 PM 2 comments:

I doubt anyone will read this, but writing about it makes me feel a bit better. A couple days ago, I saw something strange. Something... not quite human. I stood there, in my living room, staring out the window at it for at least five minutes. It just stood there, staring back at me. I was transfixed. I somehow managed to pull myself away long enough to get a picture of it. 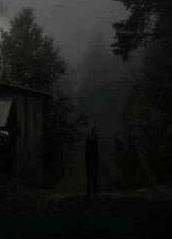 There's only one thing bugging me right now... What the hell is this?
Posted by Samael at 8:27 PM 3 comments: